Home NEWS Article 370 – How did it Affect Jammu and Kashmir and Srinagar?

Article 370 is a special status given to Jammu and Kashmir at the time of Indian Independence. As per the article 370, the place is kept under special status, which includes a separate constitution, a flag, special reservation for the Kashmiri people. Even individuals from the different states of India cannot purchase land and property as they have been believed to have separate citizenship.

Highlights included: A curfew had been announced hours before the center revoked the bill. Restrictions were abolished for citizens of Kashmir against the Friday prayers ahead of Eid. Forces are being deployed across the valley. Advisor Ajit Doval of NSA ordered authorities to see it to the issue so that no Kashmiris can be harassed.

Neither the RTI nor the RTI is applicable. Duration of the legislative assembly is for six years. Panchayat has no right to rule. They can choose their chief minister and minister from their community. They never had any financial security.

After Article 370 was revoked by Amit Shah, a clampdown was imposed just before hours. The whole city was shut down to five days. Protests and curfews were established. People couldn’t move out freely even to offer prayers while Eid was a few days away. Moreover, the division of Jammu & Kashmir and Ladakh has led to the abolishment of special status, flag as well as the constitution. 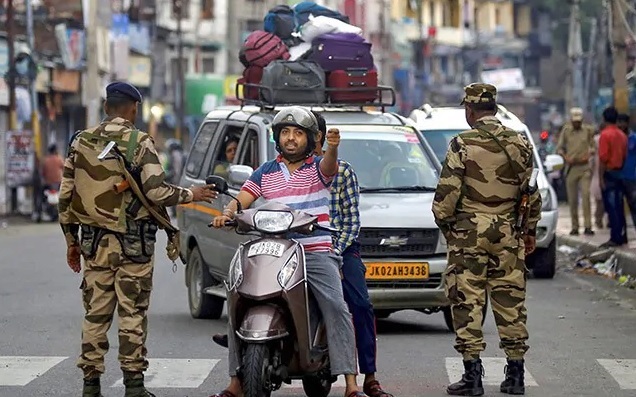 Due to the future situation of curfew the major cities of Srinagar and valleys across Kashmir were put on high alert but the security and paramilitary forces. Centers made sure that no Kashmiris are harassed. Telephonic lines and television link were shut down except three news channels including Doordarshan.

Shops were closed all throughout the day. High alert areas were put under barricade by paramilitary forces and medical stalls were established in case of emergency safety for locals. The center has kept the forces on alert so that people could offer prayers ached of Eid.

Centre ensured that local people around the lanes of cities and valleys could offer Namaz in local mosques.

“Elaborate arrangements have been put in place. The situation is being closely monitored across the Valley,” a senior official had told India Today.

Few protesters became violent and threw pebbles at locals. One local was saved when drowning in the water while he was chased by the protesters. However, some Kashmiris are still harassed amidst high-security forces. There was a free movement of people and they could go to mosques.  A security personnel was deployed in huge amount for the ease of people there.

Apart from that, an Advisor of NSA conveyed thanks to the people of Kashmir and security forces for the smooth running of the situation. Moreover, the reports have come normally controlled. Despite some minor incidents from a few places, everything got controlled by security forces. No major things have happened as per the sources. However, even though everyone had mixed reactions, they were not terrorized after all.