According to a report from Chandigarh, Punjab Chief Minister Captain Amarinder Singh invited the Kashmiri students for lunch on the occasion of Eid -ul-Zuha yesterday at the state Bhavan.

Eid-ul-Zuha or Eid -ul- Adha or Bakra Eid is a festival of sacrificing an animal which is close to them to prove their devotion, faith, and love for Allah. This is a huge festival for the people of the Muslim community and is celebrated with zeal worldwide.

Yesterday on August 12, Kashmiri students from various Punjab Universities were invited for lunch by the chief minister Captain Amarinder Singh of Punjab at the state Bhavan. On this occasion of Eid-ul-Zuha, many Kashmiris studying in Punjab failed to visit their home town due to the restrictions imposed by scraping held by the release of Article 370.

More about the Lunch story

The CM organized this lunch for them to remind the students that despite being away from home due to studies they can celebrate their own festivals together. The CM even asked them to think Punjab as their second home, their second family. Around 125 Kashmiri students were invited for this lunch. 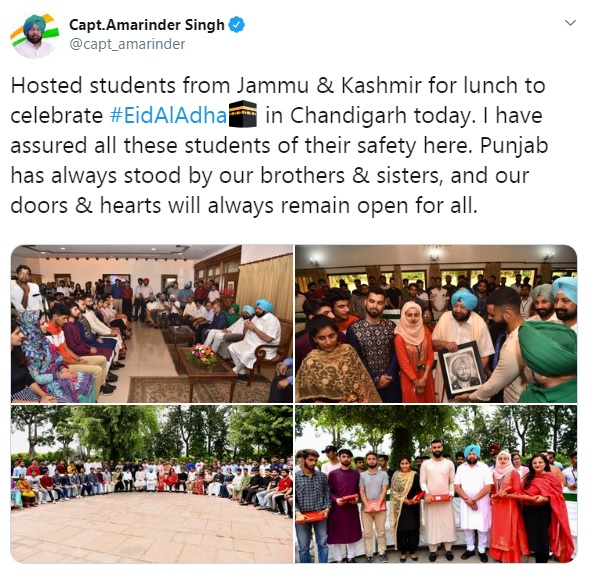 Amarinder Singh assured the Kashmiri students that things will come into place soon. Situations will come easy once handled smoothly and people, it worked smoothly. He even calls Jammu & Kashmir as his second home.  And them his family too. Being a host he himself distributed sweets to the students to celebrate this occasion.

Accepting his warm behavior, the students anticipated their love and respect towards him by gifting a momento of love – a portrait sketched by one of the Kashmiri student Abdul Azad, pursuing Fine Arts from Chandigarh University.

Students who came for lunch said that “they too consider Punjab their Second home”, as they always felt safer and moved freely with no such restrictions to them even after, the scary attack of Pulwama which killed 40 CRPF Personnel.

They also admitted about the big-hearted Punjabi peoples who have always been kind and equal to them. Despite differences, the students really felt like a family being invited for lunch in Eid like they used to invite other families back in hometown. They were feeling isolated and lonely when they couldn’t visit their home for Eid until they received the lunch invitation from CM.

Everyone thanked the CM Amarinder Singh for this warm welcome and kind gesture shown towards them.

After Article 370 has been removed, which granted special status, Jammu & Kashmir observed its first Eid today without any hassle without any special status. They celebrated Eid together as equal beings. Various parts of Jammu & Kashmir have been under high alert by security forces after abolishing of Article 370, which divided them into two separate union territories without Ladakh.

They were in confinement till a week when center announced the revoke of Article 370. This special status was removed by the Indian Parliament to make one nation.