Best Tamil Movies in 2017: When we looking into the aspects of hits films in Tamil Nadu, there are few big movies on the list. In 2017, the Tamil Cinema gave again over 200 films for the fourth consecutive year including the films yet to release on this weekend.

Apart from this, there are other five films in the row of the hit list. The debut director Hip-hop Tamizha’s Meesaya Murukku, Siddharth’s Aval, Gautham Karthik’s Hara Hara Mahadevaki, Lokesh Kanagaraj’s Maanagaram and Arun Vijay’s Kuttram 23. 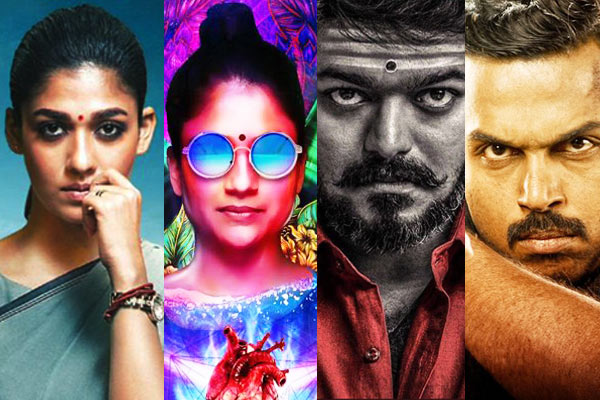 1. Aruvi (2017): A superb drama centred around a unique character that unfolds as a thriller with some black comedy, an awareness movie, and a tragedy.

2. Kurangu Bommai (2017): A strong contender of the year which all highlights the screenplay of the story.

4. Maanagaram (2017): The technical crew worked more for the screenplay and story of this film.

5. Maayavan (2017): One of the best things about Maayavan is how it manages to keep us guessing until it reveals the killer and his modus operandi.

6. Sathya (2017): Remake film, though it is an engrossing watch which joins the list of interesting thriller films made in Tamil this year.

7. Theeran Adhigaaram Ondru (2017): Vinoth’s detailing story marks at top of the list than other cop films in Tamil so far.

8. Aramm (2017): Nayanthara’s strongest solo film of this year as a mass heroin, and this, she does in style.

10. Meyaadha Maan (2017): A youngster boy and girl love in a different way, also explaining the relationship between the friends.

13. One Heart: The AR Rahman Concert Film (2017): As a first-of-its-kind concert film from India, One Heart works, because, ultimately, it is all about the music!

14. Taramani (2017): Apart from narrating the stories of a few characters, Taramani also attempts to remind people about how life should be lived.

17. Pandigai (2017): A low-level hotel worker gets involved in a street fighting racket on the advice of a compulsive gambler. When the duo realise they have been duped by the gangster controlling the racket, they decided to rob him…

20. Rangoon (2017): The casting, interesting screenplay with twists and turns at the right time makes the film impressive.