To re-enter the house, she even got an offer to stay in the secret room in Bigg Boss Tamil 3 hosted by Kamal Hassan, but the offer was turned down instantly by her. Kasturi Shankar was a wild card entrant in the house and the audiences had really high hopes from her. Rather, she turned out to be a big disappointment for everyone.  She failed to prove her points and convince them to believe in her words. 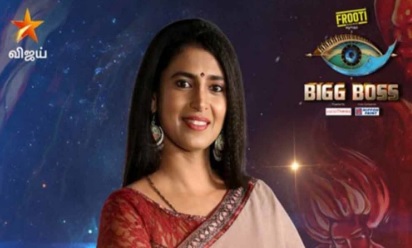 She was also a total disgrace in gaining trust in friendship. She couldn’t live up to other contestant’s expectations and soon she was considered as a joke to them. Other competent never took her seriously because of her not being a trustworthy person.

She was the ninth contestant to be out of this Show, after the few contestants mentioned above.  Even though Kasturi had the opportunity to come back to the house, she rejected the offer deliberately. As, according to her, she was missing her children back home. The Actress was expected to return back to the show, after getting this offer, but her denial was unexpected. Her sudden change of mind became a shocking surprise to everyone’s ears.

But something else was the result according to the poll result in the survey done by The International Business Times. From the survey carries out by them, the poll predicted displayed a different result. It predicted that Sandy would be the next eviction, not Kasturi, as she got lesser votes for eviction.

How did people react to Kasturi’s eviction?

After Kasturi got evicted from the house, many fans reacted in different ways. Kasturi was said to talk less and that no one is sad for eviction and her not accepting the offer to enter the show again cannot be a sympathy gainer. Kasturi has a boring manner of starting a conversation with others. Her points made no one listening to her pointless conversation.

Some said that she has pure and a gentle heart and that she was on the mission to expose real Losliya.  She is bold and outspoken but many times, while trying to be in the good books made her lost herself.

She is a much-needed patakha for the show but she failed miserably in every single expectation. She painted her destiny herself in the show so, she is herself to be blamed for her elimination. One said, her voice was really upsetting. While trying to be in the good books, she failed to get popular within the audiences. Although, being herself, she overreacts in many parts which were her failing as a part of a reality show.

To survive the reality show like Bigg Boss Tamil 3, one needs to be outspoken enough to convince people towards one’s points to a limit, which was the only thing Kasturi lacked for that show.