The fans can poll their Bigg Boss vote online or by dialing missed call numbers. Alternatively, check Cover365 Bigg Boss poll results which will be decided this weekend. According to our earlier prediction of Week 9 evictions, Raiza will get eliminated from the house. 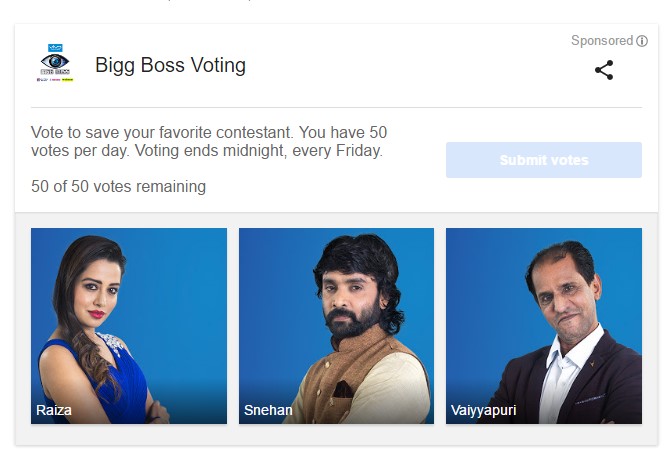 You will get 50 votes per day to save your favorite contestant from this week elimination. Snehan has some decent fan followers, hence he will be saved from the eviction unless he wanted to exit himself from the show.

Vaiyyapuri sir got some bad impression at the end of this week which is a great drawback. Even Raiza targeted Vaiyyapuri in today’s episode without giving any respect to his age. He is really good personality career wise as well as in his personal life. So most probably, Raiza will get the least number of votes this week. Vote for Snehan, Vaiyyapuri and Raiza to save them from the elimination.

In this week nominations, Bigg Boss doesn’t want the contestants to nominate wild card entry contestants who entered the house last week. So most of them nominated Raiza and Vaiyyapuri for week 9 eviction.