Bigg Boss Tamil: For the past two days, Bigg Boss is the hot topic discussed in the every city in Tamil Nadu. Since Oviya attempted suicide, a Police patrol arrived at the Bigg Boss house for the inquiry. After the things came to the normal they moved on and Bigg Boss made an official announcement about Oviya getting evicted this week.

UPDATE: Oviya has been eliminated as she wanted to be out from the fake people inside the house. But as per the official Bigg Boss vote result, Julie got the least number of votes and she got eliminated from the house today. This will be telecasted on tomorrow’s episode.

It is officially confirmed by the Bigg Boss employee as well as an image in which Oviya sitting on the Bigg Boss stage with Kamal and discussing eviction has already come out and started circulating all over the social networks. Eviction of Oviya will directly give a big impact on Vijay TV TRP as most of the people watch the show only for actress Oviya’s cute character and being honest in the house.

Bigg Boss vote status and results are already expected one. In our private poll result, Oviya got more votes and Vaiyapuri got second most number of votes and finally Julie. The same replicated in the Official Bigg Boss poll. Julie is the one to be eliminated from the show, but due to some last minute dramas, Oviya is about to get eliminated tonight.

Oviya’s father defended her today morning in an interview. He stated that Oviya will never lie or fall in love cheaply. She always does true to her heart and never cheats any one at any occasion. Oviya’s elimination is already officially confirmed and news sources say, she is in her hometown in Kerala today after getting eliminated from the house yesterday.

After the elimination of Oviya, Bigg Boss got another huge trouble yesterday. On seeing Oviya’s suicide attempt, sources claims, Police filed a case on Bigg Boss team. News from the source also states that Show is in a big trouble as people are protesting outside the Bigg Boss studio to stop the show stating it affects the whole society and creates new controversies every day.

After hearing this incident, Oviya fans wanted to bring her back to the show again. Many of them tweeted to the Bigg Boss official Twitter and Vijay TV Twitter asking to bring back Oviya to the show again. But there was no positive response from the officials so far. Some fans threatened the channel that they will stop watching the show if Oviya gets eliminated from the show.

This is the image which got circulating in the Facebook and Twitter and of course, this is a click from the set, so it must be true for sure. 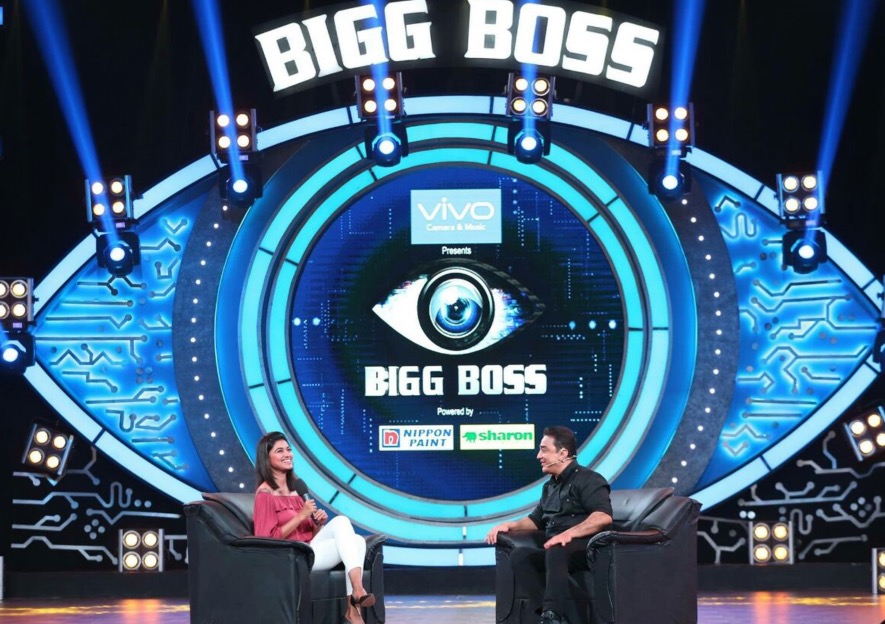 Bigg Boss live streaming can be watched on Hot Star official website or mobile app at 8:30 PM tonight. In every weekend episodes, Kamal will have a deep conversation with the in mates to expose their thoughts inside the house to the world.

Bigg Boss important scenes and highlights will be repeat telecasted on Super Vijay TV Channel every day and the same episode will be telecasted every morning on Vijay TV as well. If you missed an episode at night, you can watch it on Vijay TV in morning or watch it on HotStar any time.