The final week of Bigg Boss Tamil reality show has been more interesting as the three contestants are very competitive to each other and people will end up in a big dilemma on selecting their favorite contestant and Bigg Boss Tamil season one title winner. Bigg Boss vote finals will decide who will win this season which is a million dollar question. We will soon cover a detailed review and analysis on each of these characters Snehan, Bindhu Madhavi, Harish Kalyan, Arav and Ganesh about their presence inside the house, how influence they are and to whom we can vote and make them as a winner of this season.

According to our earlier analysis, Snehan, Arav, and Ganesh are the contestants who deserve to win the Bigg Boss title as these three contestants are inside the house from the very beginning of the day. People will still think this is unfair to vote for wildcard entries and make them as a winner. So we are pretty sure one among this old contestant will win the title. 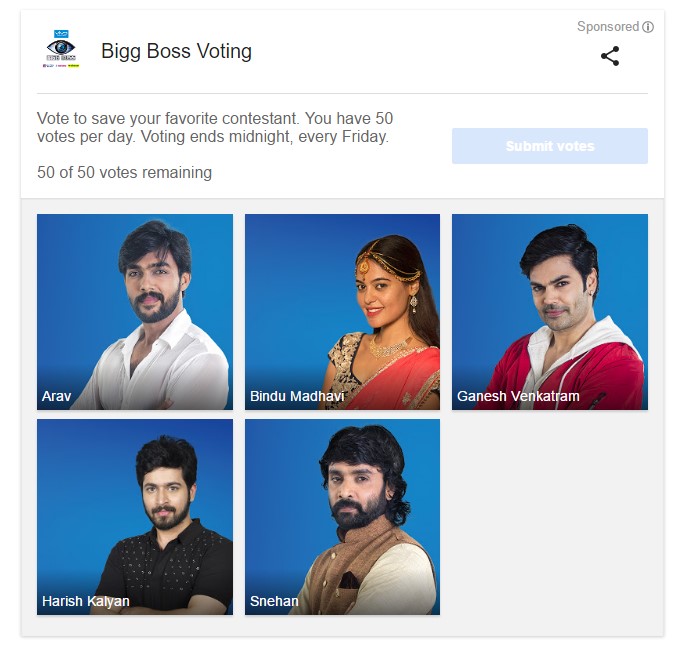 People can cast their Bigg Boss finals vote online by visiting Google.com and searching for ‘Bigg Boss Vote’ or ‘Bigg Boss Tamil Vote” to vote for their favorite contestant. Since this is the final week of the Bigg Boss Tamil, four out the five contestants will get eliminated and one will be selected as a winner.

You can cast your Bigg Boss vote in our Cover365 Unofficial private poll here in which you can keep track of voting results, stats and the percentage of votes for each contestant. Most probably, the same result will be replicated in the official Bigg Boss final result.