Bigg Boss Tamil Vote Online: Bigg Boss is becoming more interesting day by day. As we already know, the nominees of week 6 are Oviya Helen, Juliana, and Vaiyapuri. The people from all over the world are polling their Bigg Boss Tamil vote daily via the Online website and by giving missed call to their favorite contestant numbers.

Update on Bigg Boss Oviya Suicide: After 4th August episode, things went worse as Actress Oviya attempted for Suicide after her breakup with Arav. Since she violated the house rules, it looks like she is the one to be eliminated from the house this week. She has been taken to a Doctor today and it will be confirmed by tomorrow if she is allowed to continue her participation in the Bigg Boss Tamil show.

To find out who will be eliminated from the Bigg Boss house for week 6, we need to wait till this Sunday episode. To avoid the waiting situation, Cover365 created a Bigg Boss Vote poll in which you people can cast your Bigg Boss Tamil voting online and instantly click on the result button in the poll to see who is getting more votes.

Update: In today’s episode, again Oviya was cornered by other contestants as well as Arav. Still, Oviya is confident enough to deal them. Who will get eliminated this week do you think? Want to know this week Bigg Boss elimination result? Poll your vote and click on the result link below. 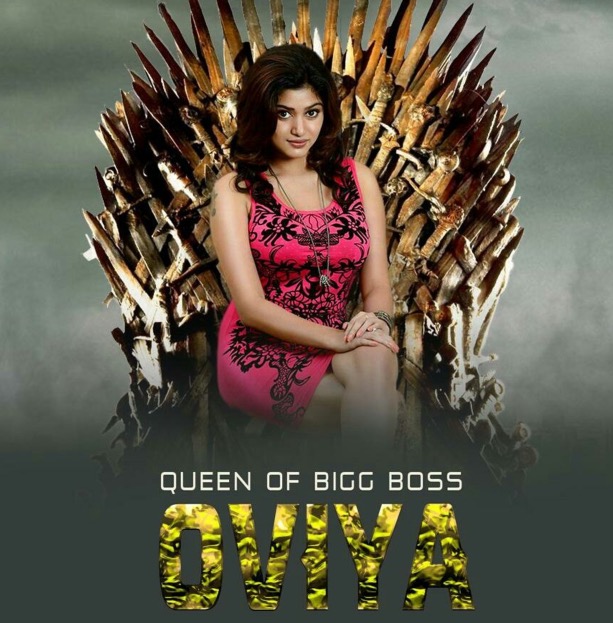 To Poll Bigg Boss Official Vote Online, visit Google.com and Search for Bigg Boss vote. You have 50 votes to cast per day with your Gmail account. Read more about Bigg Boss Vote, Elimination

Alternatively, people can cast their Bigg Boss votes by giving missed calls to their favorite contestant’s numbers. Here are the numbers of Oviya, Julia, and Vaiyapuri.

Week 1: Anuya got eliminated by getting a minumum number of votes.  Shri out of Bigg Boss Hosue due to illness.

Week 3: Harthi got eliminated from the house by getting a minimum number of votes.

Week 4: Namitha got eliminated from the house.

Week 5: No eviction as 4 contestants got eliminated from the first 2 weeks.