Bigg Boss: This week Bigg Boss elimination result has been revealed online today evening. Oviya Helen, Vaiyapuri, and Julie got nominated for this week eviction. Bigg Boss official voting poll was ended on Friday midnight around 12 PM. We at Cover365 conducted a Bigg Boss private poll and in our website, Oviya got so much support from people and Vaiyapuri next in the list. Julie got very least number of votes on our website. 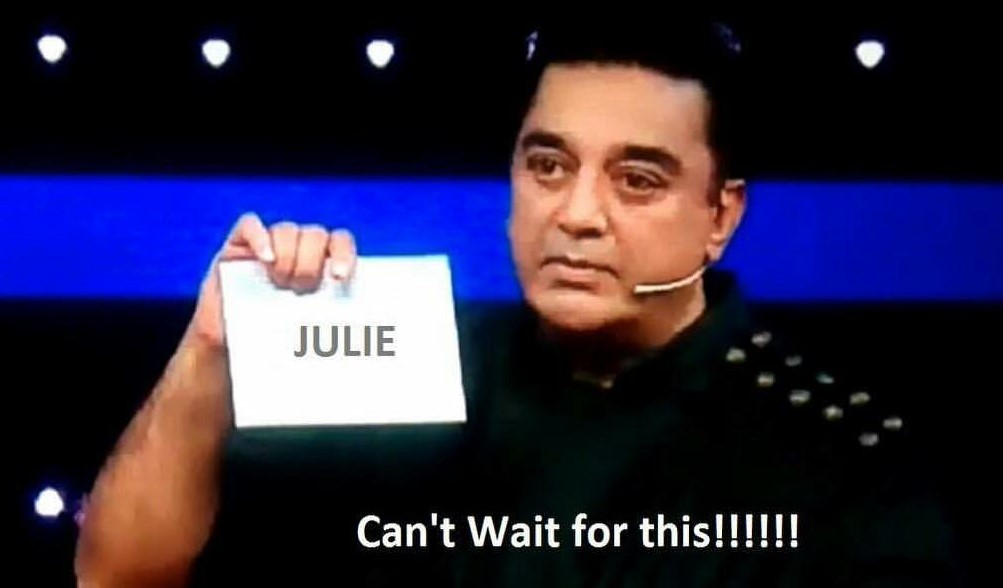 In our Cover365 Bigg Boss Vote, Oviya Helen got 80% of total votes and Vaiyapuri sir got 17% votes. Juliana just got 3% votes and here is the result of her performance 😀

The above image is taken this Saturday in the Bigg Boss set, where Julie got eliminated from the house came out to talk with Kamal sir.

Eliminations in Bigg Boss is based on people support. The contestants are asked to nominate three people from the house and these Bigg Boss asks people to poll their vote to their favorite contestant. Each one can poll 50 votes per day. The voting process ends on Friday 12 PM and the one who gets more votes will be in the house and one who gets fewer votes will get eliminated from the house.

Bindhu asked about Oviya to Julie inside the house. Julie replied to her that she will call Oviya to her home and want to maintain a good relationship with her. Last week, Julie and Oviya had a big clash inside the house. This is where things started getting worse in Oviya’s end.

After the elimination of Oviya, Vijay TV knows that TRP of the show will be decreased as many people watched the show only for Oviya. There will be a tremendous drop in the TRP this coming week and Vijay TV is talking with Oviya to make an arrangement of Wild Card entry after two weeks to make the show more interesting like before. It will be officially confirmed soon by Kamal sir.

After Oviya’s elimination, People started trending #NoOviyaNoBiggBoss hashtag in Facebook and Twitter. This will really create a big impact in the show as they missed their main and most popular contestant. Some stated in their profiles that this is the last day they are going to watch the show. After Oviya’s elimination around 50% people will miss this show without anydoubt. So, a wild card entry for Oviya will be the most awaited turning point of this show which may happen soon as per our predictions.