IPL 2018: After two years of suspension, Men in Yellow are back to the Indian Premier League. Chennai Super Kings is one of the most successful IPL team so far, as they won  IPL and Champions league T20 twice. All-time CSK favourite players like M.S. Dhoni, Suresh Raina and Ravindra Jadeja are in the lineup except, Ashwin. Also, the owners spend cash as well in the auctions by bagged good players to the team.

CSK’s biggest trademark name could be M.S. Dhoni, who will continue his IPL career as Captain of CSK. The fans are eagerly waiting to see him on Yellow jersey and also in the captaincy role once again. He has won all possible cups for the team India and CSK such as ICC World T20, ICC Cricket World Cup, ICC Champions Trophy, the IPL Trophy or the Champions League T20.

By using the same group of players, a team can do better in their game. We can see that from the team of Chennai Super Kings, Mumbai Indians, and Kolkata Knight Riders. All these three are winning IPL trophy on no. of time with same players. So, there will be a chance for CSK as the winner of IPL 2018. Let check the Chennai Super Kings (CSK) fixtures, TV listing, Time, Venue: 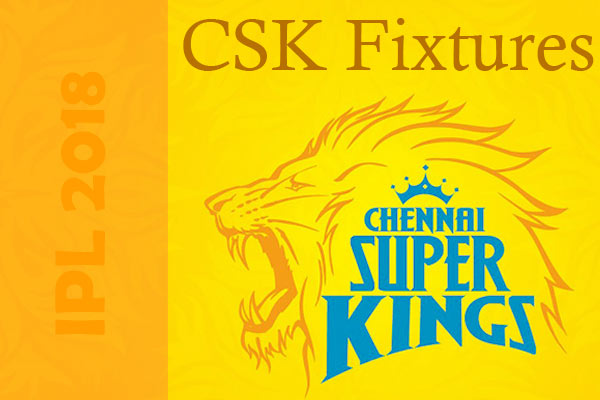 The 11th edition, IPL 2018 will be played at nine venues by spending 51 days with eight teams. Each team have at least their one home ground except Kings XI Punjab, they will play three home matches in Indore and four other matches at home in Mohali.

Watch this CSK anthem (it looks new on both audio and visual!)