During the visit to the US, PM Modi meets US President and, in his presence, Modiji says about the relationship between India and Pakistan. During their discussion, it was mentioned that ongoing issues between both countries are bilateral matter. And no third-party entry is allowed between both the countries.

According to the report from New Delhi, in the visit to the US, Prime Minister Narendra Modi specifically mentions that there isn’t any possibility to give chance to any third part between the India Pakistan issues. During the meet, he thereby declared in the presence of US President Donald Trump that all the on-going issues are bilateral in between both the neighboring countries.

Alongside the G7 Summit in France, and the visit to the US, PM Modi also addresses the media with his talk regarding the announcement made in presence of US President Donald Trump. 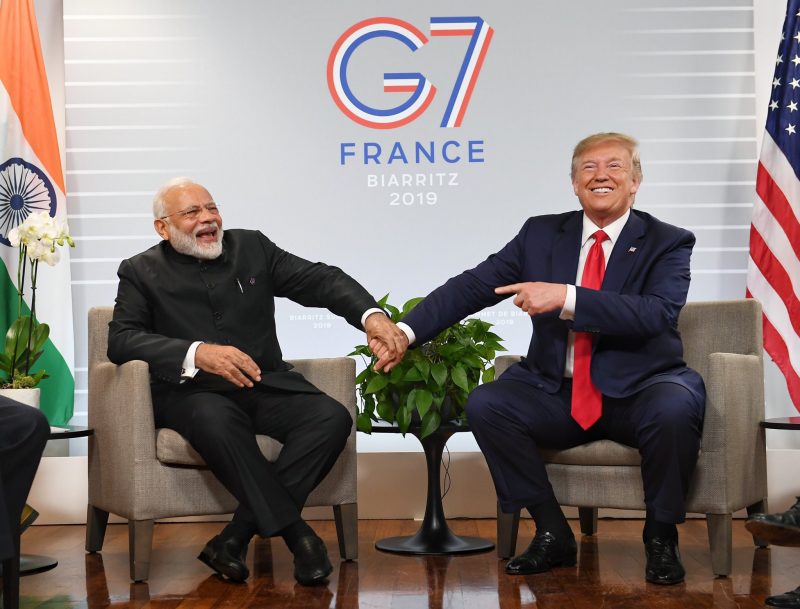 Modi said the issuers between both the countries would be discussed within them and be solved bilaterally without the involvement of any third party. He even says that he doesn’t want to give any painful tension to any of the nations regarding anything between two neighboring countries. Narendra Modi responded to several questions by media. One of the questions was raised of Kashmir issue.

After the elections in Pakistan, Prime Minister Imran Khan was informed by the Modi about the national issues in both the countries.  He says that they both need to work together for the betterment of their own countries. They need to fight against, poverty, unemployment, illiteracy, and several other social issues which are also the root cause for terrorism activities.

Besides having differences and many such common issues, both the Prime Ministers keep discussing for the improvement of their own people in the nation. The common issues can be solved within them itself, says Modi. Though sideways, developed nations like the US would be asked for any help in between there would be no clear mediation of any other third party.

What US President Donald Trump said?

US president speaks and praises the firm stand taken by the PM Modi for the Kashmir Issues. Well, after their conversation, Modi says that Kashmir issues are now under control and no major problems have occurred during the revoke of the bill. Now, Trump feels that, when Modi will next have a talk with Pakistani PM, the situations would be taken care of and they will do something good for present issues, which will surely have a positive outcome.

US President also mentions his good relationship between both the PMs (Modi and Imran) and hopes that they would be able to resolve their problems. He also added about his offered help for both the nations when and where they need any instant of time.

The discussions between them surely included some investment, trade and of course the military improvement. Some such great discussions went on between Modi and Trump. During the dinner, last night, both of them (Trump and Modi) learned something new from each other about their countries.

Issues of the revoking of Article 370 in Kashmir on 5th of August, also came into point of discussion as it was a major backdrop in Pakistan. Several issues aroused due to this Article 370 in Kashmir. Tensions were then caused between India and Pakistan and caused few serious and arrogant reactions from the Pakistanis on the special status being taken off from Kashmir and dividing Ladakh and Kashmir into two separate Union Territories.

And the revoking of Article 370 was an International Issues and has to be removed for the equality of people and advised Pakistan, not to rise any unnecessary issues and accept the decision in reality as a practical matter.