by Shivali Singla
in Politics
0

In recent panchayat election, Tripura has seen an avalanche win for Bharatiya Janata Party (BJP). Prime Minister Narendra Modi congratulated his party and workers with a tweet “Tripura’s faith in BJP remains unwavering”. He has given all the credit of success to “the power of development politics” and has urged workers nationwide to learn from the “Karyakartas” of the northeast states. Prime Minister Narendra Modi believes that such a repeated win is never possible without the relentless hard work of the “Karyakartas”. 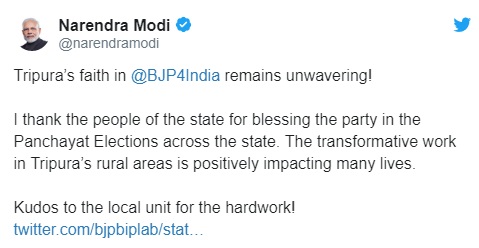 “Tripura’s faith in BJP remains unwavering! I thank people of the state for blessing the party in the Panchayat Election across the state. The transformative work in Tripura’s rural areas is positively impacting many lives. Kudos to the local unit for the hard work,” PM Modi tweeted expressing his gratitude to the people of Tripura.

It is worth noting that BJP has broken into a 25 year left ruling state lead by former chief minister Manik Sarkar. The left rule came to an end after Bharatiya Janata Party (BJP) did clean sweep the state in the assembly election in March 2018. Mr. Sarkar had told that BJP victory had caught him off guard. Tripura used to be seen as one of the unchallengeable state for left. Now the left party is left with only Kerala in its bag.

Bharatiya Janata Party (BJP) led alliance has begged 43 out of 60 assembly seats in March 2018. It is seen as a result of a power-packed campaign to seek “Poriborton”. It had won not a single seat in 2013.

“I would urge BJP Karykartas from other states to interact with Karyakartas from Tripura. The party’s repeated successes in the state demonstrate the power of development politics and democratic temperament. It also shows that with the right effort everything is possible,” Prime Minister Narendra Modi tweeted in reply to the CM Biplab Kumar Deb’s tweet.

Chief Minister Biplab Deb has also expressed his gratitude and congratulated the people of Tripura with a tweet “Congratulations Tripura, It’s your win”. A thing needs to be marked that he was the youngest chief in any state before he was made a chief minister.