Korean Super Series: Indian badminton ace PV Sindhu created history earlier today when she won the Korean Super Series as she becomes the first Indian to do so. In a stunning 3 game thriller, Sindhu defeated her Japanese counterpart Nozomi Okuhara in 22-20, 11-21, 21-18. With this win, the Olympic silver medallist turns to avenge her finals loss to Okuhara in Worlds Badminton Championship 2017 that happened last month in Glasgow, UK. Okuhara was worthy of a powerful opponent as she fought relentlessly till the last serve, only to be defeated by Sindhu who played brilliantly and never gave up.

The world number 4 played ruthlessly against the 8th seeded Okuhara as she dominated her in every form. Sindhu’s long powerful rallies were no match against Okuhara. Her crosscourt backhand whip was even surprising to watch and Okahara visibly struggled. Interestingly Sindhu lost the second game when she couldn’t cope with Okuhara’s great net play which Sindhu failed to connect with. They moved on to the third and final game where Sindhu dejected from the second game loss played in a tactical way. She showcased her net skills and Okuhara was seen baffled as the Indian took a 6 point lead eventually winning the game and the series. 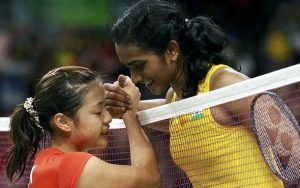 People all over the world soon congratulated the Indian, who tallied her head-head wins with the Japanese 4-4. In a match lasting for a little below 2 h, it was quite a war as the women have met earlier in less than a month ago. This victory sealed Sindhu her 3rd Super series win. Twitteratis applauded the ace and wished her all the best in her future endeavors. 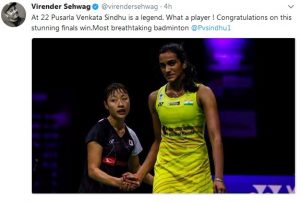 Recent wins for the shuttler