Kashmir is India’s internal issue and no other country can interrupt the issue. These words of Congress leader Rahul Gandhi are at hype on his Twitter handle. He also added that he is disappointed by some of the decisions of government regarding Kashmir but still Pakistan has no rights to invade the personal matters of India. 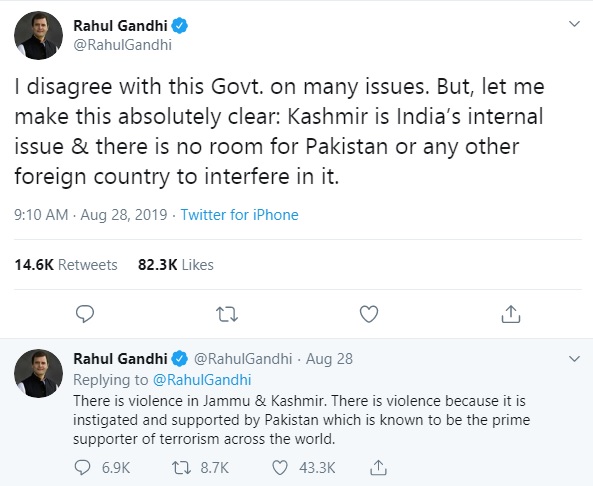 As the center ordered to bifurcate Jammu and Kashmir along with revoking Article 370; Several countries have already recognized India’s decision to scrap Article 370 as an internal matter including Russian envoy Nikolay Kudashev. He stated, “Abrogation of Article 370 is a sovereign decision of the Indian government. It is an internal matter of India and such issues can be resolved between India and Pakistan under Shimla and Lahore agreements. Our views are exactly the same as India’s.”

This started when Rahul Gandhi along with his delegates was sent back from Srinagar airport when he went there to analyze the situations there after the abolition of Article 370.  This is succeeded by the opposition were hanged his statement because he was under pressure from the people. “How can Rahul Gandhi’s views change just because he now represents Wayanad?” he said.

The Statement Made by Randeep Singh Surjewala

Tensions between India and Pakistan have spiked after the Parliament gave its assent for abrogating Article 370 and while the government is trying to recreate the heaven in the newly announced union territories Jammu- Kashmir, and Laddakh by restoring the connections and life there; Pakistan is heel braiding to internationalize this matter.