Vaibhavi Shandliya is in the female lead. Sampath, Vivek, Robo Shankar, VTV Ganesh, and Powerstar Srinivasan are the supporting characters of this film. It is a remake of Telugu film Loukyam. Santham had many heroic films but there are not many portions especially for heroism. He tried that as first time now but makes tough to seat throughout the film.

Sakka Podu Podu Raja Story: Hero (Santa) kidnaps a girl who is the sister of Don (Sampath) to unites with her boyfriend by escaping from the forced marriage. In that time, the hearo meets heroin (Yazhini) and falls in love. She also accepted that after refuses initially. 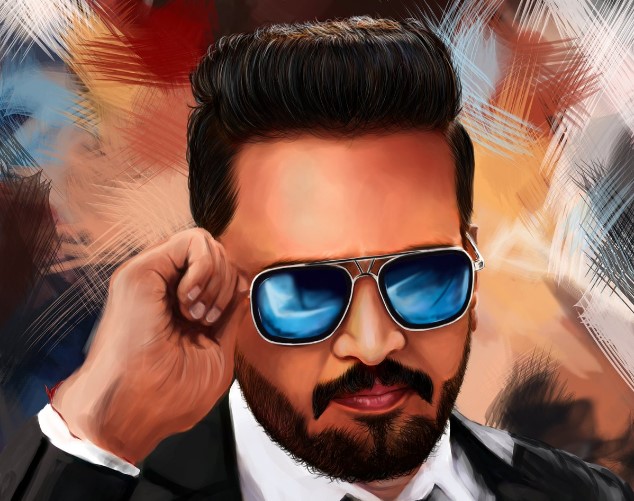 Yazhini (Vaibhavi Shandliya) is the youngster sister of Sampath. It creates a shock to all of them. The remaining films are carried with funs and comedy, then how the Don accepts her sister love. How Santa convinces the Sampath.

Music of this story was composed by the STR. He gives all of them as his own film to Santhanam’s heroic film.

Sakka Podu Podu Raja Review: USP of Santhanam is missing, he gave more attention to his look than the story. He looks with fancy beard and hairstyle, it’s good. The heroine has used as maximum for more glam.

In a line, it is just for an enjoyment. All Santhanam fans can watch this film. For others, it is not suited as much those who all looking and like to spend on serious, thriller, horror, social messaged movies.

Ram:Except for STR’s songs and background score, there’s literally nothing in the movie till now. Usual rom-com template which fails to work and the old-school treatment crashes the watch. ‘Very Bad’ so far.

Priyanka: Songs are good… and this is an enjoyable ride.

Sujith: A typical mindless commercial entertainer with laughs, songs n fights. Vivek’s scenes evoke genuine laughter and so does few of Santa’s one liners too. STR has done a good job with bgm. Timepass.

Cinemas Planet: (3.5/5) : Songs are simply soothing & made the film look so attractive in both the halfs !! 1st half was decent with screenplay letting down but grips with lots of entertainment in the 2nd half.

Arunn: A complete transformation by Santhanam Not the usual comedy. Serious, but smart and relatable characterisation to the Masses. Epic Class. Easily his Best Performance in his career. STR musical Hat’s Off Thalaivaa.