Sushma Swaraj Passes Away Due to Cardiac Arrest

Leaders from all over the country expressed their grief on this melancholic incident. Even senior leaders like Harsh Vardhan, Rajnath Singh, Smriti Irani Prakash Javadekar reached AIIMS after they got informed about the incident.

Prime minister Narendra Modi showed this inconsolable loss via a series of tweets saying “A glorious chapter in Indian politics comes to an end. India grieves the demise of a remarkable leader who devoted her life to public service and bettering lives of the poor. Sushma Swaraj Ji was one of her kind, who was a source of inspiration for crores of people.” 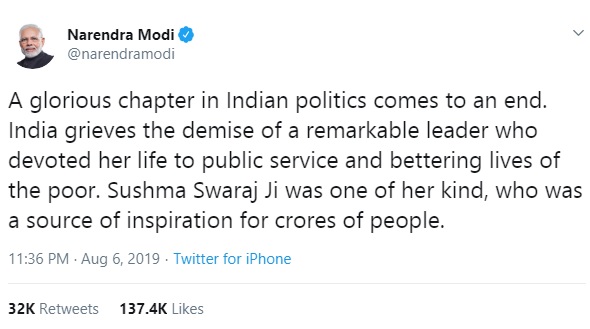 This incident took place all of a sudden and even a day before this Sushma Swaraj was totally fine and congratulated Prime minister Narendra Modi for the decision of to revoke the special status of Jammu and Kashmir and central government’s approval on making the state into two Union Territories. She tweeted “Narendra Modi Ji – Thank you Prime Minister. Thank you very much. I was waiting to see this day in my lifetime.”

The respectable president showed his sorrow by tweeting “Extremely shocked to hear of the passing of Smt Sushma Swaraj. The country has lost a much-loved leader who epitomized dignity, courage & integrity in public life. Ever willing to help others, she will always be remembered for her service to the people of India.”

It is evident that in the hustle and bustle of the Jammu Kashmir valley matter this incident grabbed all the attention because of the status Sushma Swaraj hi had. Leaders even from opposition respect Sushma Ji and it can be seen easily by their activities on Twitter.

“I’m shocked to hear about the demise of Sushma Swaraj Ji, an extraordinary political leader, a gifted orator & an exceptional Parliamentarian, with friendships across party lines. My condolences to her family in this hour of grief. May her soul rest in peace. Om Shanti” tweeted Congress party leader Rahul Gandhi.

A Look at Her Bright Career

During 40 years of her lifespan in politics, Sushma Swaraj bagged appreciation from the whole nation. In 1977 she became the youngest cabinet minister in the Haryana government, the first women chief minister of Delhi in 1998 and also the first female spokesperson of a national party.

In 1999 Sushma Swaraj gave a tough time to Sonia Gandhi when she stood against her in Ballari. Sushma Swaraj was a leader and an individual of her words, Sushma said that she would learn Kannada before the casting of the votes and she did what she said by addressing an election rally in Kannada. This is not a loss only to BJP but to the whole nation and people can’t forget the glorious life Sushma Swaraj lead and what she did for the county.

Article 370 Abrogation: The Chaos that Followed